On 2012 June 5 and 6, the Hinode observatory joined thousands of telescopes around (sometimes literally around) the world in watching Venus cross the face of the Sun.

Hinode’s Extreme ultra-violet Imaging Spectrometer (EIS) had a few scientific and technical goals in mind in observing the transit: from looking for the interaction of the solar wind with Venus’ atmosphere; to using the precisely known path of the transit to work out the minute roll of the telescope’s field of view – what you might think of as “which way is up?”.

In this movie, you see Venus first quite far off the Sun’s disc to the left (solar “east”), but it’s still silhouetted. This is because the Sun’s corona extends far beyond its surface. Then, we see it going (conveniently!) past a bright active region – 2nd and 3rd panels from the left – and a dark coronal hole – 4th panel – before exiting on the solar west. The wavelength of light that we use here is 195 ångströms, which is the wavelength emitted by iron so hot that it’s lost 11 of its tightly-held electrons. It’s possibly of interest that these are what we call slot data, whereas we also have “slit” spectra that will reveal much more about the precise balance of ions and electrons in the solar atmosphere and (hopefully) Venus’ atmosphere, too.

It takes a lot of people to achieve data as seemingly simple as these, so thanks in particular to David Brooks (NRL/GMU), Shinsuke Imada (NAOJ), Toshifumi Shimizu (ISAS/JAXA), Alphonse Sterling (NASA) and Kunichika Aoki (NAOJ), as well as many other members of the Hinode team, for arranging these observations so expertly.

1) The gaps in the coverage are due to what we call “orbital events”: these are when the satellite passes through radiation zones — when the detectors are bombarded with particles to create a TV static effect — or when the sunlight is blocked for a short while by the Earth’s atmosphere, a transit of a different nature!

2) The apparent up-and-down wiggle of the planet as it crosses the sun is actually a parallax effect, caused by the orbit of Hinode, which circles the Earth along the line between day and night, crossing the north and south poles. This is the same effect that was used, in the 1769 transit, to work out the distance from Earth to the Sun. Fun fact: knowing this distance and how much Venus appears to wiggle up and down in this movie, you can work out the mass of the Earth ;o)

Well, unless you spent all of yesterday with your head in the same clouds that blocked my view (and it is half-term for many, so I don’t criticise a little R&R time), then you’ll almost certainly have seen the stunning image that my old colleague Joten Okamoto put together from the some of the Venus transit we got back from Hinode.

For those of you that hadn’t seen it, here you go! 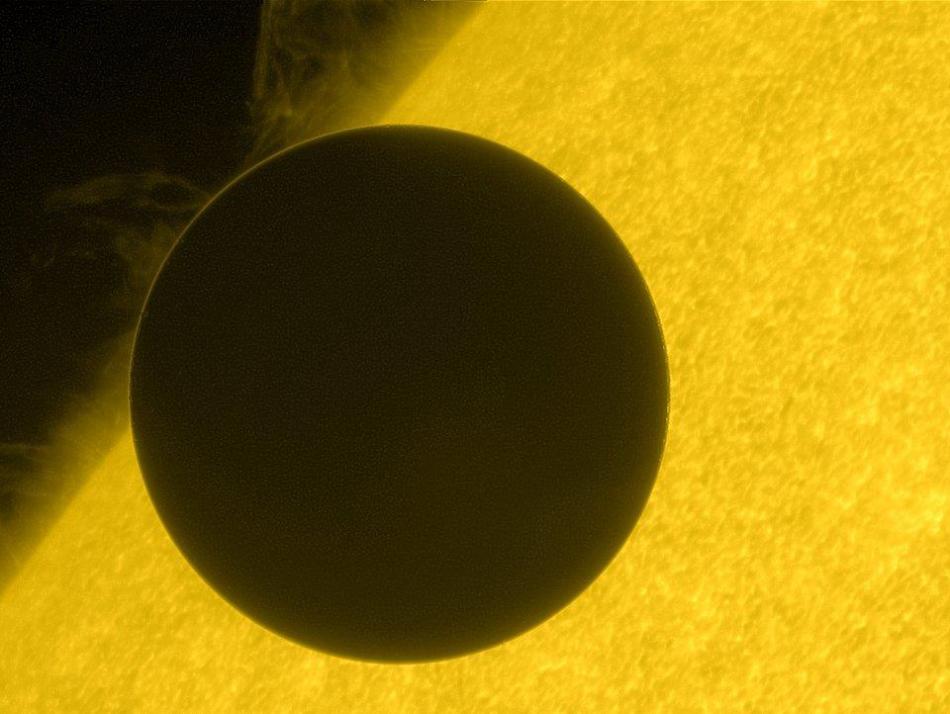 Full disclosure: I’m the Project Scientist of another of Hinode’s three telescopes, the EUV Imaging Spectrometer (EIS). So I’m biased in liking this a lot.

Now, I can describe the bits of the image here in professional terms: you can see a wispy prominence  poking out from the Sun’s edge, behind the upper-left part of Venus’ disc; there are slightly fuzzy spicules all along the edge of the Sun; you can see the refraction of the Sun’s light along the edge of Venus where it’s not on the Sun; and you can even see some stray light from optical imperfections on Venus’ disc showing up as faint bright light where the planet should show up as just black…

But I defy anyone not to find it beautiful.